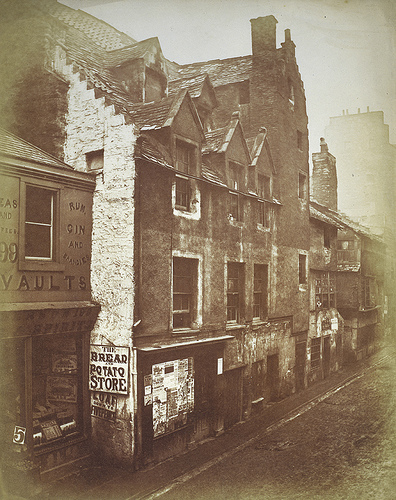 They’d needed one for some time. Scotland’s Irish came in two big waves, one after the 1798 “Rebellion” and the other after the famine. Most settled in the West or Glasgow. Their individual stories tell you why: poverty meant that, whichever port they arrived at, they were obliged to walk to their eventual homes. Which is why Edinburgh’s Irish community wasn’t of Glaswegian size:  Michael Whelalan, of whom more anon, came from one of the relatively few families who made it on foot from the West Coast to the Capital, and his family’s new baby died as they crossed Blackford Hill.

Glasgow became Europe’s most densely populated city because poor immigrants were funnelled into the oldest and worst housing en masse, the area around the High Street, an area which to this day spurns attempts at renewal. In Edinburgh, the Irish, Catholics almost to the last individual in a strongly Protestant city, found themselves unable to command anything more than a room in the Cowgate. And then the rooms were subdivided.

I drove my in-laws through the Cowgate last June. It was raining, and the water roared against the floor of my car as more of it swept down from Blair Street and Old Fishmarket Close. Even after countless attempts at revival, it’s still like travelling down a long fishtail joint. Before the slum clearance of the 1870s, a downpour would have filled the Cowgate with sewage, and it was that version of the Tudor street that Canon Edward Joseph Hannan moved to in 1861.

He was 25 then, young, relatively delicate and scholarly. Indeed, he’d roared through seminary, and was fair set for a career in academic Dublin. But his bishop had been thinking about the embattled Irish minority, crammed into stinking rooms no one else wanted in a foreign city. He mentioned them to Hannan – why? he can’t have thought the brainy boy a suitable candidate to travel even to Belfast. You choose: book-lined rooms in one beautiful Georgian city, or the worst end of another Georgian city that hates you? And Hannan chose.

He’d have found himself William McGonagall’s priest almost immediately, you suspect. Then he’d have discovered that “Molly Malone” was written about an Edinburgh “Little Irelander”. The rest was uglier: photographs of his parish from the time are few (photographic plates cost money, and little of it was spared for the Grassmarket, St Mary’s Wynd or the Cowgate) but those that remain reveal row upon row of shops calling themselves “grocer and spirit merchant), and if a cart stops long enough to show up, it’s invariably a dray holding barrels. The High Street, 30 metres higher, boasted a Temperance Hotel and two Temperance bars, clustered around John Knox’s house.

He wouldn’t have experienced the ghettoization of his countrymen before. Let alone the ghettoization of himself. But it didn’t take him long to make a decision: the Irish in Edinburgh were cut off from society, from living proper lives, from the roles their talents merited, and the authorities weren’t going to step in: it was up to him. Education and social skills would be key. His uncle had founded the teetotal Catholic Young Men’s Society. Something in the blood to build on, then, and he founded a branch in Edinburgh, and began the long, patient dialogue with the deaf authorities that would, ultimately, transform his parishioner’s fortunes and do much more than that.

You read his life and think, “he must have been a remarkable man.” We always think people are remarkable in football. Men gifted immense talent who make something of it become heroes. I watch Youtube highlights late at night when I’m unhappy because they remind me that living’s worthwhile. Don’t you sometimes? But in among all of the heroes, and men of the people, and captains on the pitch, and members of the top 100 “x”s and inspirational leaders and all, Hannan stands out: he must have been a remarkable man.

At the end of the 1860s, the makeup of Edinburgh Council had improved to the extent that the conditions prevailing in the Cowgate and environs were capable of sickening them. They sent in photographer Archibald Burns ( a kind of eastern Thomas Annan) to photograph them for posterity, and, behind him, demolition men. At that stage, Annan had been in Edinburgh, patiently writing and talking to men who thought of him as either a nuisance or the anti-Christ, for seven years.

His immediate worry was that his people weren’t merely left on the street, unable to afford a roof over their heads. This is the unwritten story of slum clearance, one which didn’t truly figure until the Chelsea rebellion (crushed) of the 1920s. And you’ve never heard of the Chelsea rebellion, more than likely. Annan dealt with that, and saw a chance to do more.

From somewhere, he generated the then-huge sum of c.£8,000; and somehow, he talked the Council into selling him a large chunk of the new St Marys Street that followed the old Roman road over the site of a Tudor drain called St Mary’s Wynd. He’d already been buying churches for his people, and now he built them St Mary’s Halls, which still stand. A school, college, teetotal pub and sporting club in one, and a beautiful building too, it would have stood out – the Protestant equivalents that existed were all wealthy middle class exclusives – and showed the Irish that they were, after all, living beings with a stake in the ground of old Edinburgh.

The building wouldn’t have had time to become smoke-blackened when Michael Whelalan, a member of Hannan’s CYMS, came of age in 1875. Whelalan was a fervent user of the sporting facilities Hannan had somehow built – boxing, athletics and fitness classes were all available at the Halls – and a few hundred yards to the west, Whelalan was a spectator at some of Edinburgh’s first football matches.

Funny how these early games are always matches between fully-fledged sides, and funny how the spectators are the ones who found clubs by being inspired by these finished articles into organising kickabouts with their mates. It happened to Whelalan – he loved what he saw, and ran to his priest to urge him to copy it. But he didn’t have mere kickabouts in mind.

Hannan looked into football, approved of what he saw,  and did the job properly. Hibernians was Whelalan’s idea, named for a group swallowed up by the CYMS, The Ancient Order of Hibernians – but the grand launch at St Mary’s Halls, timed to coincide with the celebrations of the centenary of Daniel O’Connell, was typical Hannan, tying it all in with Irishness, identity, history, intelligence and pride.

Hannan did the job properly: at the very beginning, he approached the Edinburgh Football Association – itself not much older then than MK Dons now – for approval. They told him to approach the Scottish FA first: a classic hand-off in what would become a rugby town. Hannan approached the Scottish FA: “We are catering”, they told him, “for Scotsmen, not Irishmen.”

In the meantime, Hibernians were playing practice matches amongst themselves on the eastern end of the Meadows. Scratch games go on there today in exactly the same place, and you can stand in the doorway of the Sick Kids Hospital and listen to the shouts and gentle applause carry their way to you on the wind.  To secure themselves a pitch, in the midst of the first football craze, Hibs’ men had to arrive at 6a.m. Within a few days, the opposition got wise to them, and with that, the Protestant mobs arrived to drive them off.

Hannan kept his low voice going, politely, intelligently, in middle class ears. Hibs rejection, as he saw it, was a project, not a problem. The man who had raised beautiful builings in slumland and bought churches for Rome wasn’t going to be put off by Scotch jocks. EFA members were going to have to get used to the Tony priest with more culture and style than they had whispering their praises and cultivating their favour. Back in Little Ireland, Hannan talked to other kinds of people.

This showed the metal of the man: an Irish mob, of navvies and coal-heavers, began turning up on the Meadows early in the morning to see the Protestants off. Hannan’s work and wisdom: knowing that this was not something to be solved by polite conversation. The Dublin academic had it in him. His heavies became bodyguards and supporters and, most of all, peacekeepers. Hibs were left alone. Soon his navvies could stop pretending to be the violent parodies Edinburgh wanted them to be, and now their great-great grandchildren follow their ghosts down Albion Road on Saturday afternoons.

The EFA had banned their member clubs from playing against teetotal, working-class, Roman, Irish Hibs. But their practice matches, going on alongside real games between Edinburgh’s young football fraternity, were drawing attention and spectators. Hannan’s quiet, polite voice didn’t quite ever go away; and on Christmas Day 1875, he made an inroad: Hibs found themselves opponents. Hearts! And lost, 1-0, but they’d play Hearts again after that, take revenge, and perhaps to show gratitude for their opponents’ braving the EFA omerta.

In January 1876, Hannan’s voice gently bullied another top Edinburgh club into secret rebellion: Thistle’s second XI snuck onto a pitch in the south fo the city against Hibs’ “second XI” (whatever meaning the phrase had in the circumstances) and Hibs had their first win. On the 5th of February, the first teams toughed it out and enjoyed a 0-0 draw. The EFA reimposed their ban.

Hannan must have been a remarkable man: Hibs wouldn’t have another game for more than a year. It took the Dubliner another 18 patient, quiet, civilised months to achieve his breakthrough: Frank Watt, a member of the Edinburgh FA, cried uncle, just to make Hannan go away, and gave his support. Hibs were into the EFA. Then it was the SFA’s turn. Forty years before Cambrai, they woke to find Hannan’s tanks on their lawn and gave only limited resistance. Hibs were to respect the Reformation and John Knox by staying out of the Scottish Cup for one further season (it proved a protective measure: Hibs went through the tournament like a hot knife in 1877-8). But otherwise..

He must have been a remarkable man; but some things remain. Edinburgh is one of the world’s most heavily-photographed cities, but Archibald Burns, who was under orders, and Thomases Begbie and Keith aside, Little Ireland went virtually unrecorded. Begbie’s photographs of Cardinal Beaton’s house show it standing as licenced premises owned by a man called Kennedy in a dirty cobbled road with an open drain down one side. Next door is a dealer in spirits. Keith’s photographs show an empty road, but with a dark blur at head height, all that’s left of the people Hannan came over and served. He could have spent his life in curtained rooms with books, port and the relatives of Oscar Wilde. But some people just don’t do that. 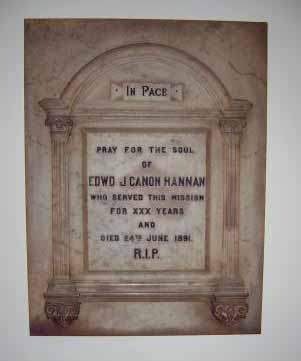